In the Flesh and the Red Road 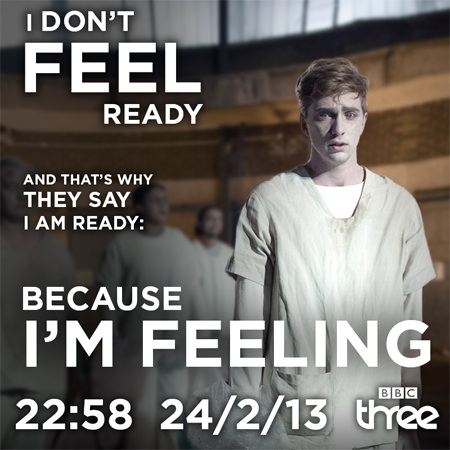 Last night I somehow got sucked into staying up late and watching the pilot of a new television drama. It is a BBC show called In the Flesh; it's in the post-zombie apocalypse genre.  It's not the sort of thing I normally enjoy (hate gory scenes), but the premise intrigued me and there was so much heart in the storytelling I kept on watching.

So the basic set-up we get in the first episode is that our young PDS (Post-Death-Syndrome) suffering hero, Kieren Walker, is tormented by guilt (and graphic flashbacks) of the horrific acts he committed in his pretreated state (calling him a recovering zombie would be politically incorrect). He and countless others with his condition have received government sponsored medical and cosmetic assistance and are being reintegrated into society.  The communities they are returning to, however, aren't all convinced that this is a good thing--especially since if PDS sufferers go off their daily meds their brains quickly slip back into a 'rabid' state. Tensions are high and lynch mobs aren't uncommon. Families struggle with how to relate to and trust their returned loved ones. It is even revealed that there is an underground movement of PDS folks who are preparing for some sort of rebellion.

Science fiction shows that resonate with the masses generally do so because they address real-world social issues in a thinly veiled form (Paulo Freire would say the writers identified generative themes and created effective codes for them).  Now I'm not exactly sure what specific generative themes this show taps into for folks in Britain, but after watching I realized that it is a very good metaphor for issues of communities living along the infamous Red Road in DR Congo. My Congolese clergy colleagues have raised my awareness of the extreme challenges of demobilizing and reintegrating militias that have committed horrific acts against their own people.  With the level of drugs and psychological abuse used to turn many young people into mass murders, it is not that inaccurate to think of them as recovering zombies.   The social harmony problems faced in many towns and villages in Congo are strikingly similar to the problems that play out in this fictional village in the UK.

Based on the community development model developed by Freire and those who came after him, we can use 'codes' such as the show In the Flesh to safely explore the dynamics of and possible responses to our real world social issues. Thus, despite looking away from the screen during parts of the show and having some disturbing dreams afterwards, I'm very much tempted to watch the next episode.


Taylor
Posted by Taylor Walters Denyer at 12:09 AM