When in Djibouti, be sure to visit Lac Assal. It is the lowest point in Africa, third lowest depression on earth, the world's largest salt reserve, and the world's 2nd most saline body of water.

Translation: The water is crystal clear and you float--- like really float-- as in sit a child on your stomach and you still float high without effort, and you'd better bring extra water for rinsing off because it is so salty that your entire body becomes covered in salt crystal as soon as you start to dry. 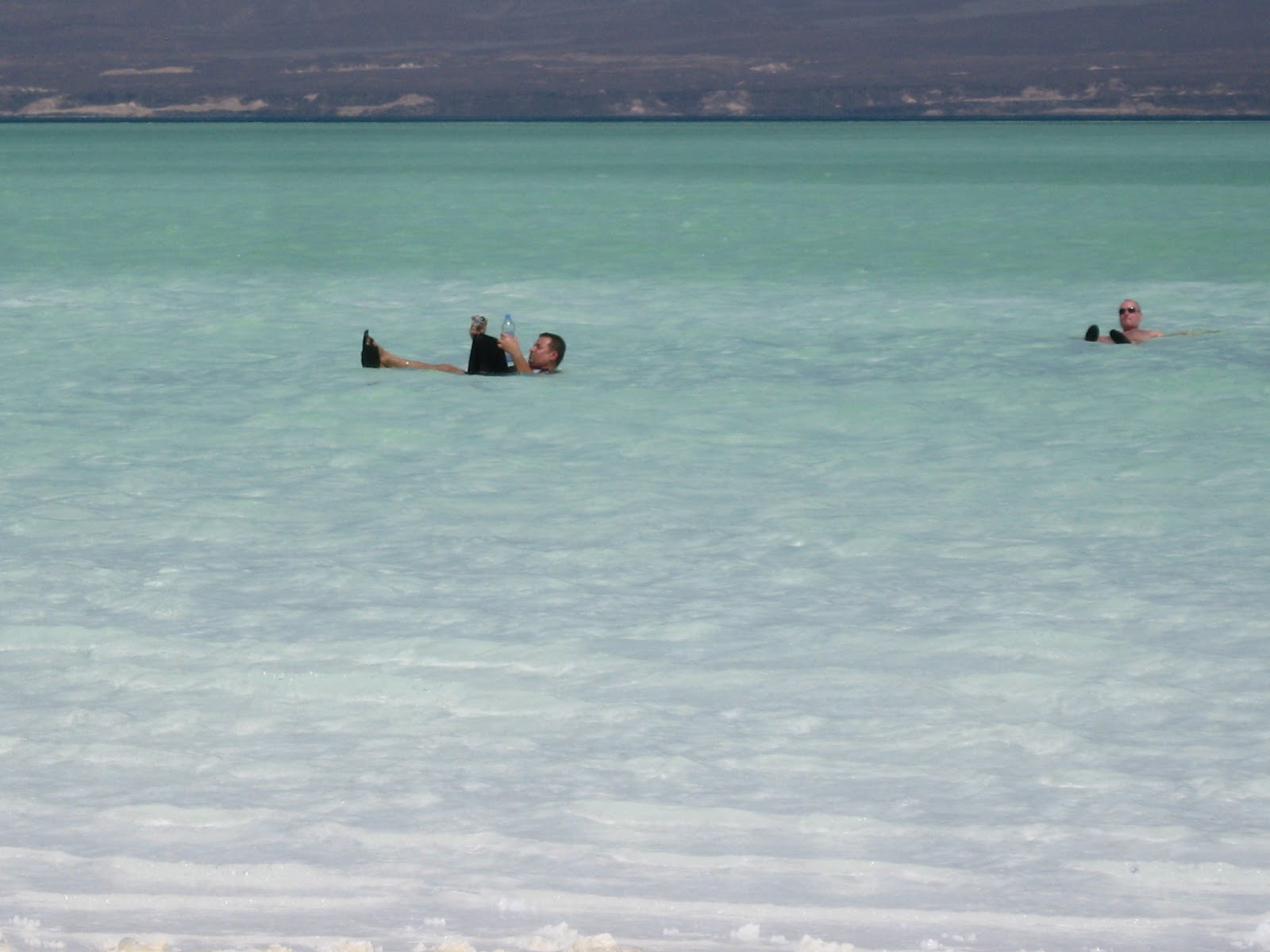 The other thing to do at Lac Assal is collect salt pearls and salt crystals.  They make great natural art for home.  These Djibouti salt pearls are so unusual that they were featured on Salt News (I know, the fact that there is a news blog dedicated to gourmet salt is amazing to me too).   According to Salt News, you can

"serve Djibouti Boule in a gimlet, using gin from the freezer and adding the salt ball at the last minute.  You then drink in a race against the dissolving salt.  Or wrap a Djibouti Boule with ground lamb, egg, breadcrumbs, and herbs and do meat-encrusted salt balls, meating your salt instead of salting your meat is not just witty, it’s delicious, and plays with the cooking time and texture of the food in interesting ways.  Or just enjoy the tactile pleasure they offer.  I keep a bowl of the on desk and roll them around between my fingers when I’m trying to figure something resistant to figuring, like what to do with Djibouti Boule. Roll some Djibouti Cutie around a plate with more angular geometries of sashimi, or melon, or what have you.  Perch some atop a beet and goat cheese salad for visual drama and textural intimidation (the crystals are actually somewhat soft, but seem hard as marbles). Scatter grilled or broiled seafood with Djibouti Pearl. Let some intermingle with the juices of a steak, a lobster salad, or what the heck, an oyster. Djibouti Dew is effectively a sprinkling salt.  It has an elusive, but ultimately hard and in your face intensity that makes it suitable for spicy foods found anywhere from Thailand to Madagascar to Peru to Mexico."

A BBC news corespondent also did an article on Lac Assal, but it is a bit of a downer,  and I promised you posts about the enjoyable parts of life in Djibouti, so I'll just mention it in passing.
Posted by Taylor Walters Denyer at 2:13 AM No comments:

"So, Taylor, what happened with that construction project in Lusaka that you spent so much time telling us about?  You never got around to doing a follow-up blog on it."

I'm so glad you asked.  Those of you who know me well or have read my blog posts from when I was working in Zambia know that through no planning of my own (i.e. the hot potato dropped firmly into my lap not long after arriving to town) I ended up playing a major role in helping the United Methodist Church's Lusaka district obtain a title deed on a large plot of land north of town and acted as the communications link between SIFAT and district leadership. I expressed to you my mixed emotions about the initiative--about how the missiologist in me would suggest to anyone considering such a thing to run away quickly, and yet how I sensed that I was being called to shepherd this project precisely because I was keenly aware of the difficulties it would face.

After the countless trips to bureaucratic government offices I had truly hoped that, if anything, the district leadership would succeed in obtaining a title deed and that I would still be around the hold that dang piece of paper in my hands.  My wish was finally granted one month before I left Zambia.  Rev. John Ilunga beamed with pride when he returned from the Ministry of Land, and I squealed with joy. 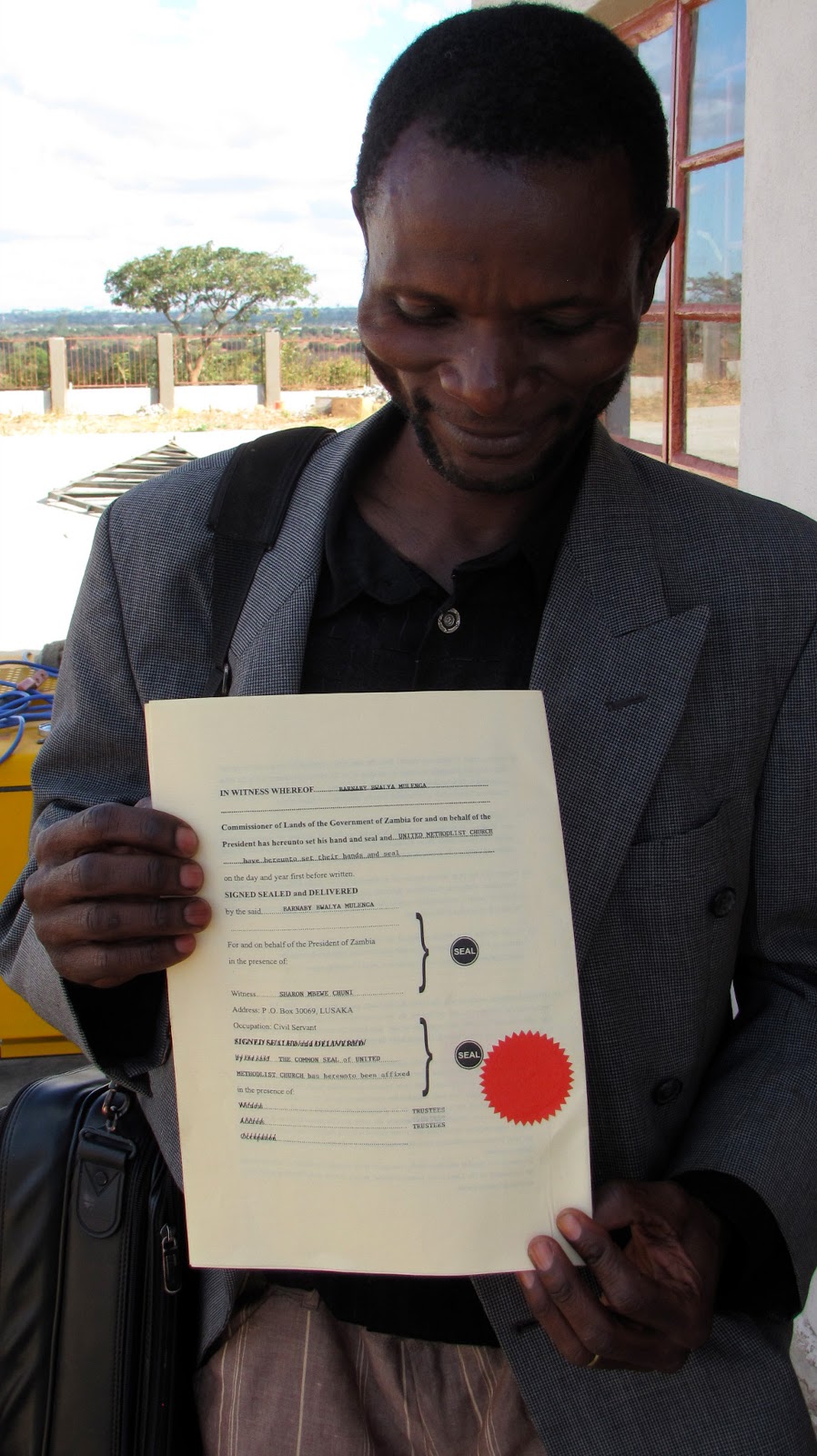 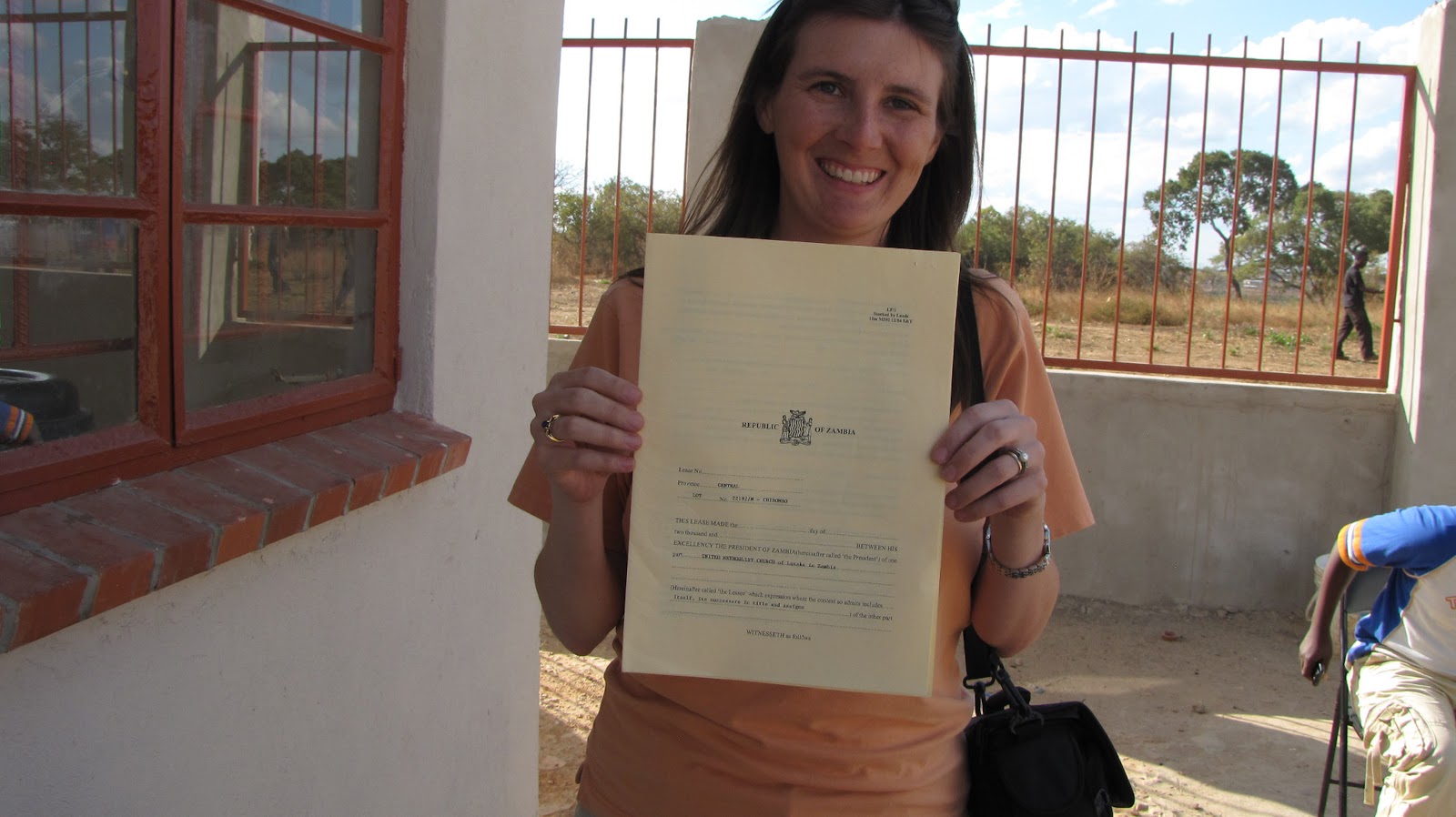 I got to be around to see the caretaker's house built (which John, Mary and their children live in), the exterior enclosure completed, and the much of the main building's structural elements go up.  Was even given the honor of preaching at the first official worship service in the building. 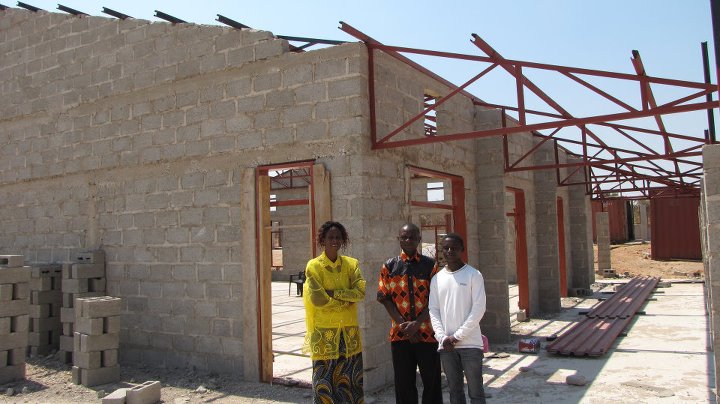 The construction stage is still ongoing and volunteers are welcome.  So if you'd like to spend a vacation going on safari, seeing Victoria Falls and meeting some great people--and helping them build a conference/training center while you are there, contact my friends at SIFAT. 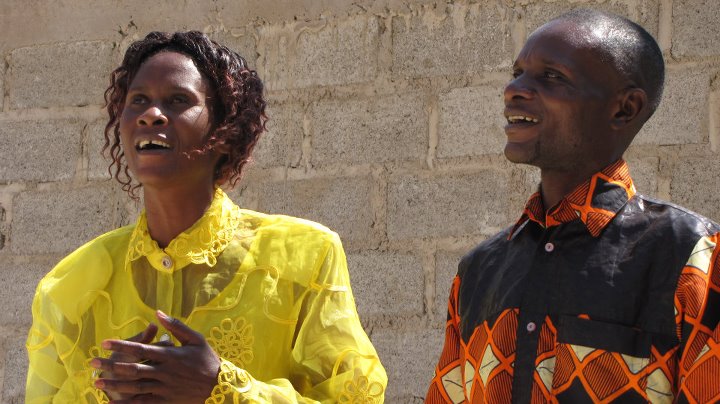 Posted by Taylor Walters Denyer at 8:15 AM No comments:


Our colleague Fausto DeGuzman got a GoPro camera and created these two great videos while here in Djibouti.

Whale Sharks  (yes, I got to swim with whale sharks too on a later date---amazing experience)

Road trip to the chimneys at Lac Abbe--I went on this trip
(organized by my friends Armina and Rony at Phoenix Travel Services )
Posted by Taylor Walters Denyer at 3:19 AM No comments:

This weekend I hit the 6 month mark of my time living in Djibouti.  Six straight months without leaving the country, and a wonderful six months it has been.  I’m serious—not one ounce of sarcasm.  I really am enjoying living in Djibouti and look forward to the next 18 months here.

This may come as a bit of a surprise to some of you.  Djibouti has a bad reputation.  When telling people I was moving here, the responses I received were usually “My condolences” or “Where?!” I myself didn’t know diddly-squat about the country until it appeared on our bid list. Researching it online didn’t provide many clues as to what to expect, and books on the subject are hard to find.  Not even Lonely Planet can tell you much—just a few pages inserted into their book on Ethiopia.  After over a year of studying the topic, what I had learned could be summed up in the following points:

1)    Djibouti is freakishly hot much of the year
2)    Djibouti’s main sources of income are the rent paid by the Americans and French for their military camps/bases here. The port is also a major player in the economy.
3)    There are thousands of non-Djiboutian military troops stationed in the main city
4)    The vast majority of Djibouti men are daily users of a drug called Khat (read High in Hell for more about this)
5)    Men who have made their wealth from piracy own fancy homes here.
6)    Most Djiboutians are extremely poor
7)    Most of Djibouti is unfit for agricultural efforts
8)    There didn’t seem to be much to see/do in Djibouti  (which turned out to be completely incorrect)
9)    Djibouti used to be part of Ethiopia, but the French rented it to use as a shipping port and never gave it back.  Now it is an independent state.
10) BUT there is the snorkeling and the whale shark migration to look forward to!

After arriving and getting my official orientation, I learned a few more things--- like that HIV and tuberculosis levels are very high, and that one of the most extreme forms of female genital mutilation continues to be inflicted on the majority of Djiboutian girls.

So now that I’ve told you all of that, I’d like to say (especially to those considering coming here) that life in Djibouti is actually quite nice if you are one of the lucky ones to have a living wage.  Djibouti is full of stunning beauty both above and below the waterline. Djibouti has good restaurants and beaches, and in the winter the weather is fantastic.  There is a decent French elementary and high school and a French-run hospital with competent staff. Unlike most capital cities in the world, Djibouti has extremely low rates of random violent crime.  Muggings and car-jackings aren’t an issue here. Neither is air pollution or getting stuck for ages in snarled traffic.

Thus, I plan to dedicate a number of my upcoming posts to the joys of Djibouti.
Posted by Taylor Walters Denyer at 2:59 AM No comments:

If you come to Djibouti, you will most likely see camels.  It is kind of hard to miss them  (I mean this literally; you have to be careful driving at night--I've had to slam on the brakes for random camels in the road a number of times now).  They show up in the most amusing places, so I thought I'd share some of my favorite camel pictures I've taken in Djibouti thus far. 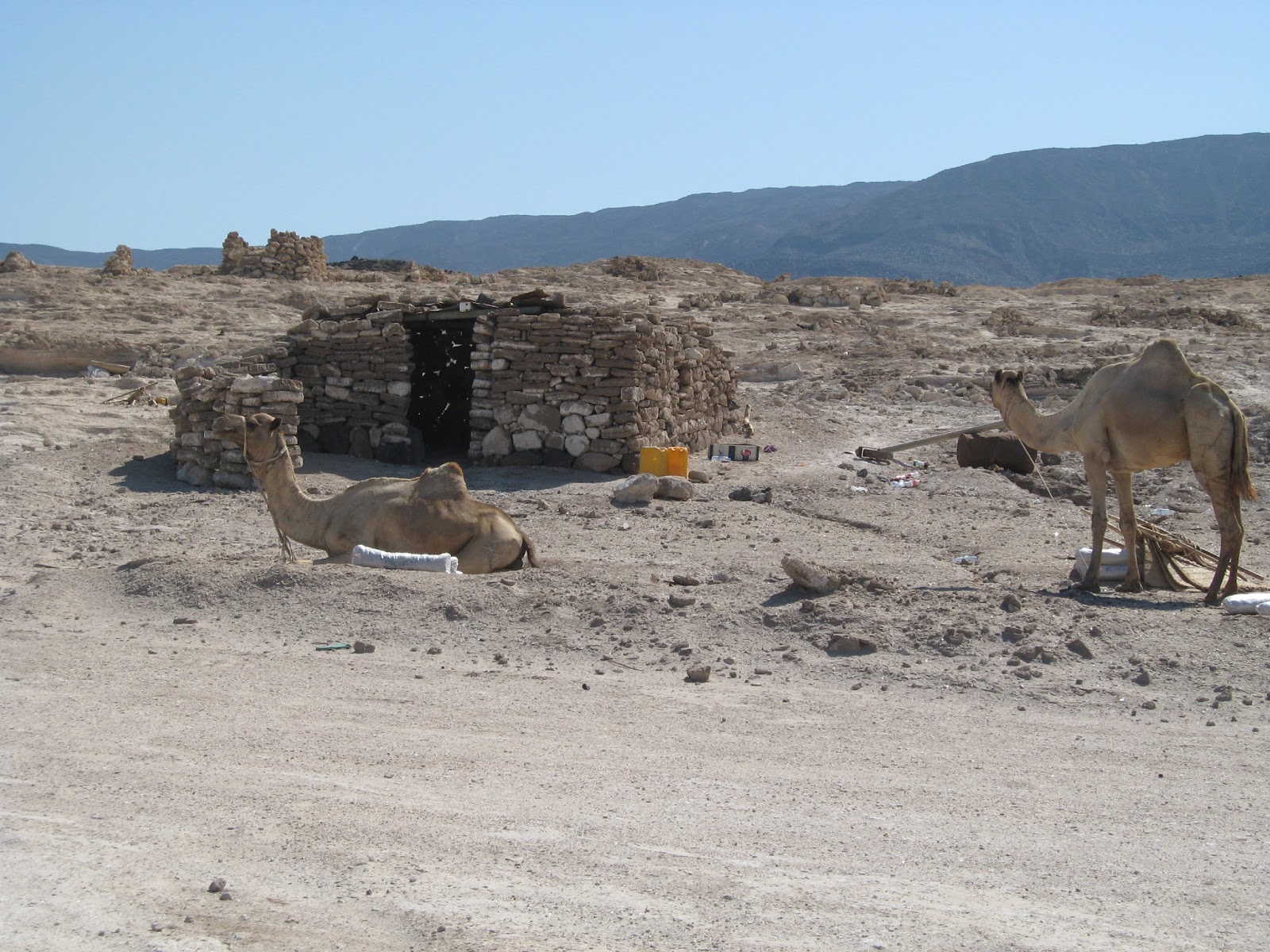 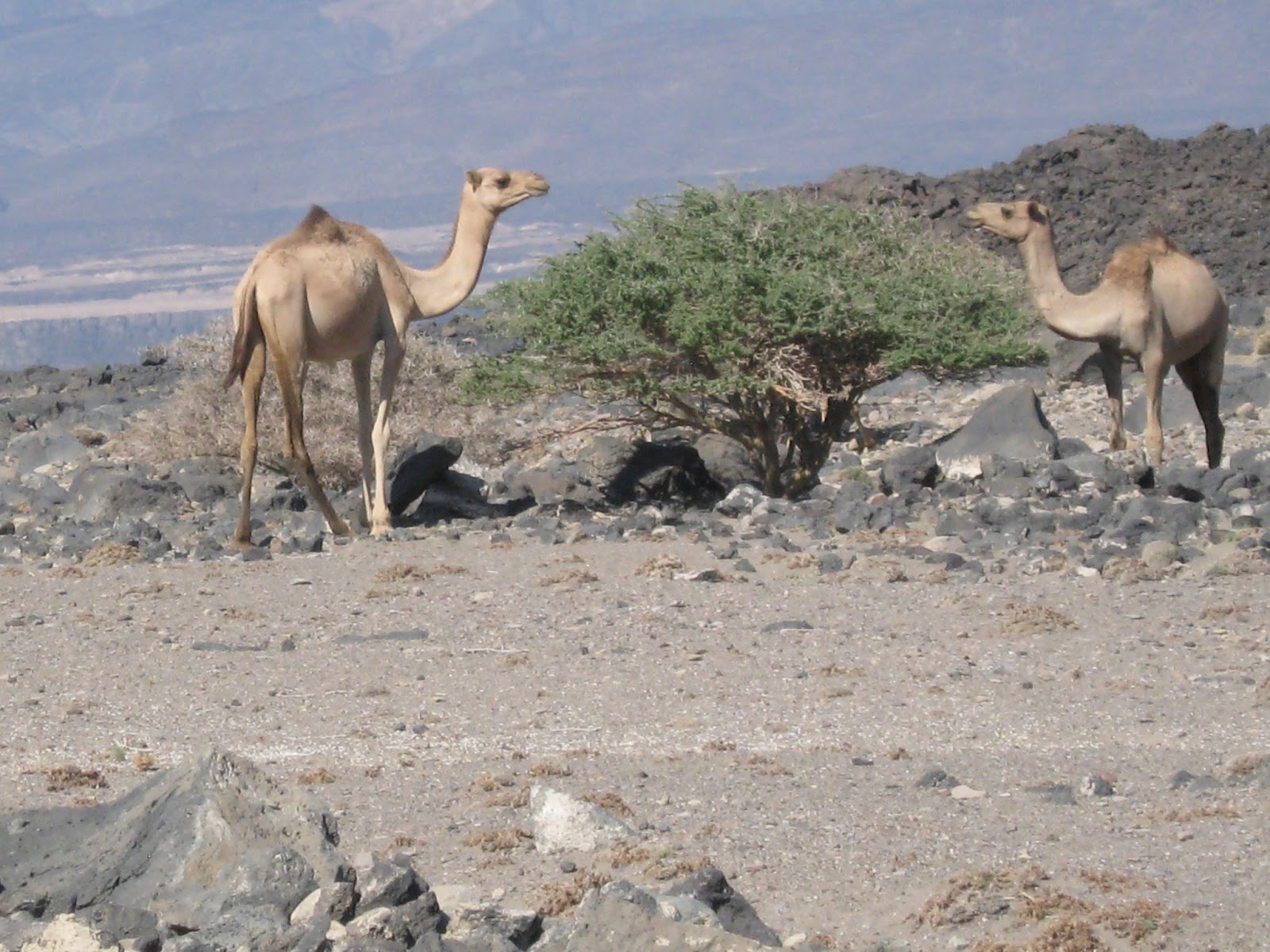 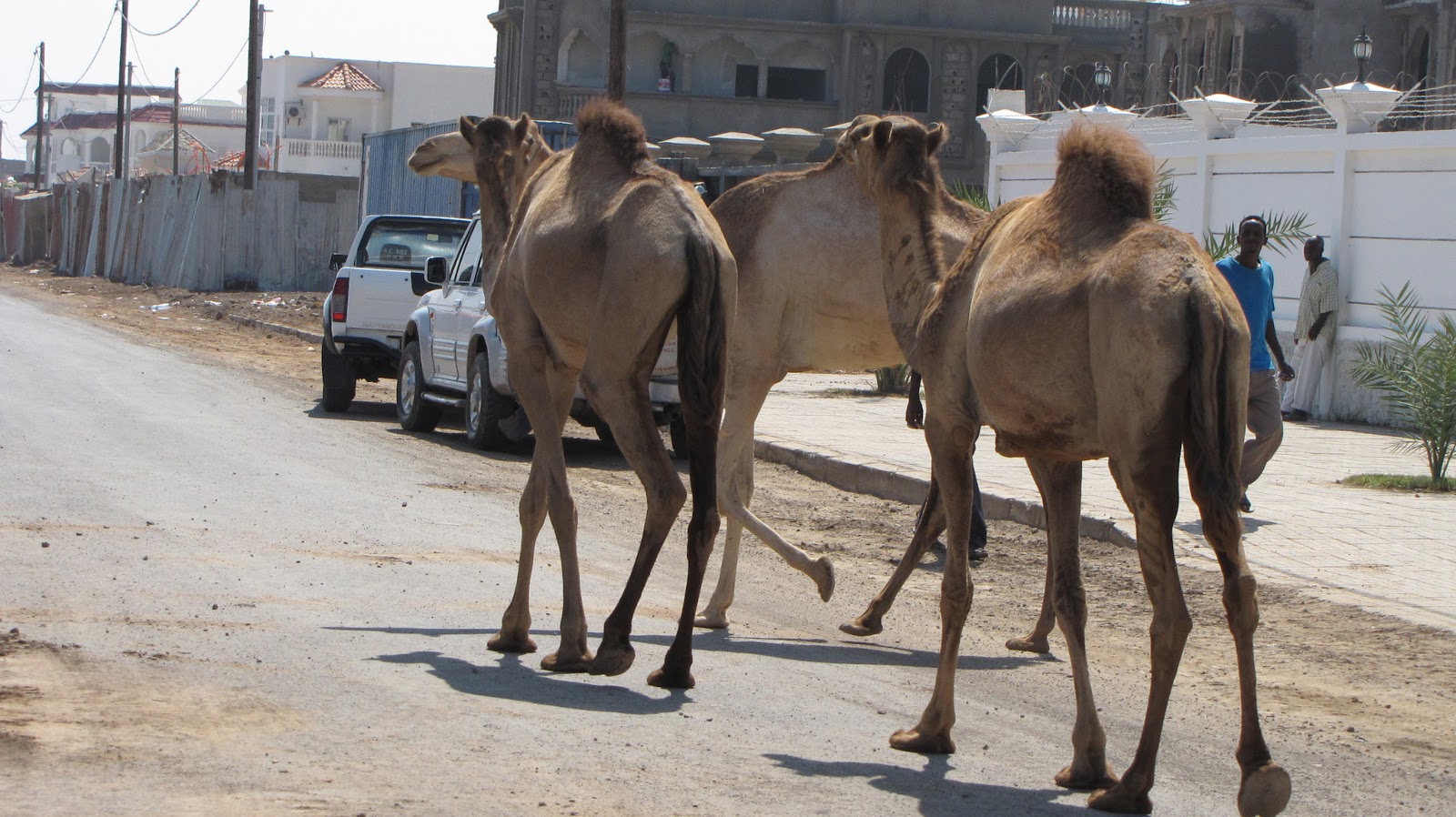 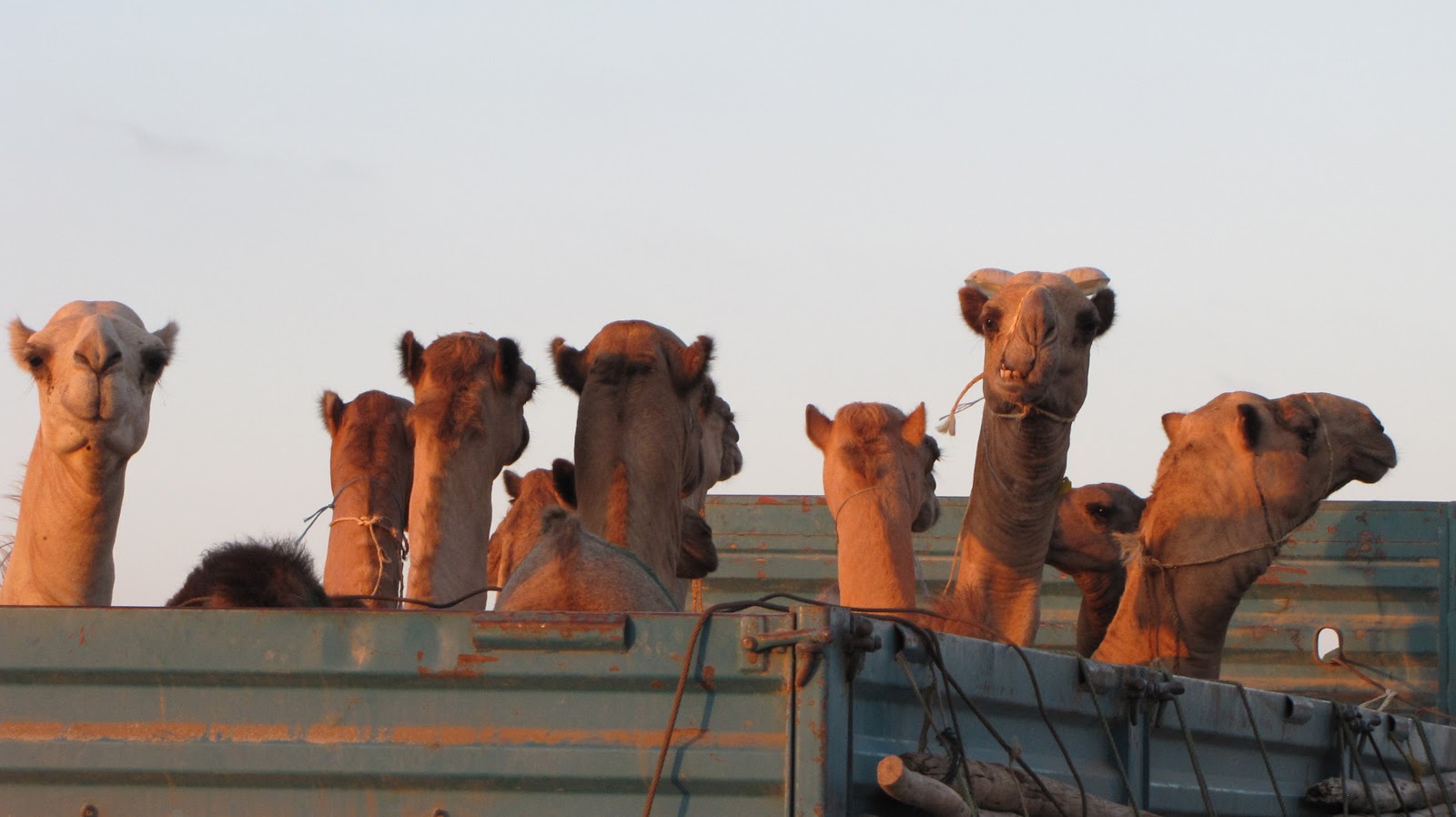 Posted by Taylor Walters Denyer at 7:27 AM No comments: