With my globally nomadic life I often feel like I'm living in a movie. Except instead of 2 hours, my movies last about 2 years.  It is closing credits time again, and we've been attending a string of goodbye parties for friends whose assignments are also ending. (FYI: The French events are extra cinematic with the nostalgic American dance tunes and visually dramatic venues.)

Closing credits time is when we attempt to tie up all the loose ends of our life here. When something can't be done I try to tell myself that it wasn't that important after all. I begin to lean out instead of in; no point starting something new, of meeting new people, of becoming more attached.  The folks I'd intended to reach out to and get to know better? That woman who was going to tutor me in Swahili? The themed parties we were going to host?  The Sheikh Djibouti dance school we joked about creating?  Not going to happen.

Being a global nomad is a bit like channel surfing.  On one hand, you get a glimpse of what's on every station. On the other, you're left wondering how the story lines would have progressed if you'd stuck around.

Closing credits time in the foreign service isn't about "happily ever after."  It's about saying goodbye and going separate ways.  As folks who study these things know, it generally takes about two years to really get your full stride once you've moved to a new place-- to form friendships that go back years (2, to be exact), to have bonded with those who are slow to trust, to have integrated yourself into a community--to have found your niche.  Most foreign service assignments are three years long, but we're heading to yet another two year gig because Algiers is also considered a hardship post.

Now sure, at each post some folks are ecstatic to leave, but those folks weren't so happy where they were; I'd prefer to keep falling in love and having sad goodbyes.

And so, a toast to Djibouti!  Thanks for the beautiful memories. I will miss you all--especially those whom I was only just starting to get to know better.  May your lives be filled with bright sunny days.

Posted by Taylor Walters Denyer at 6:43 AM No comments: 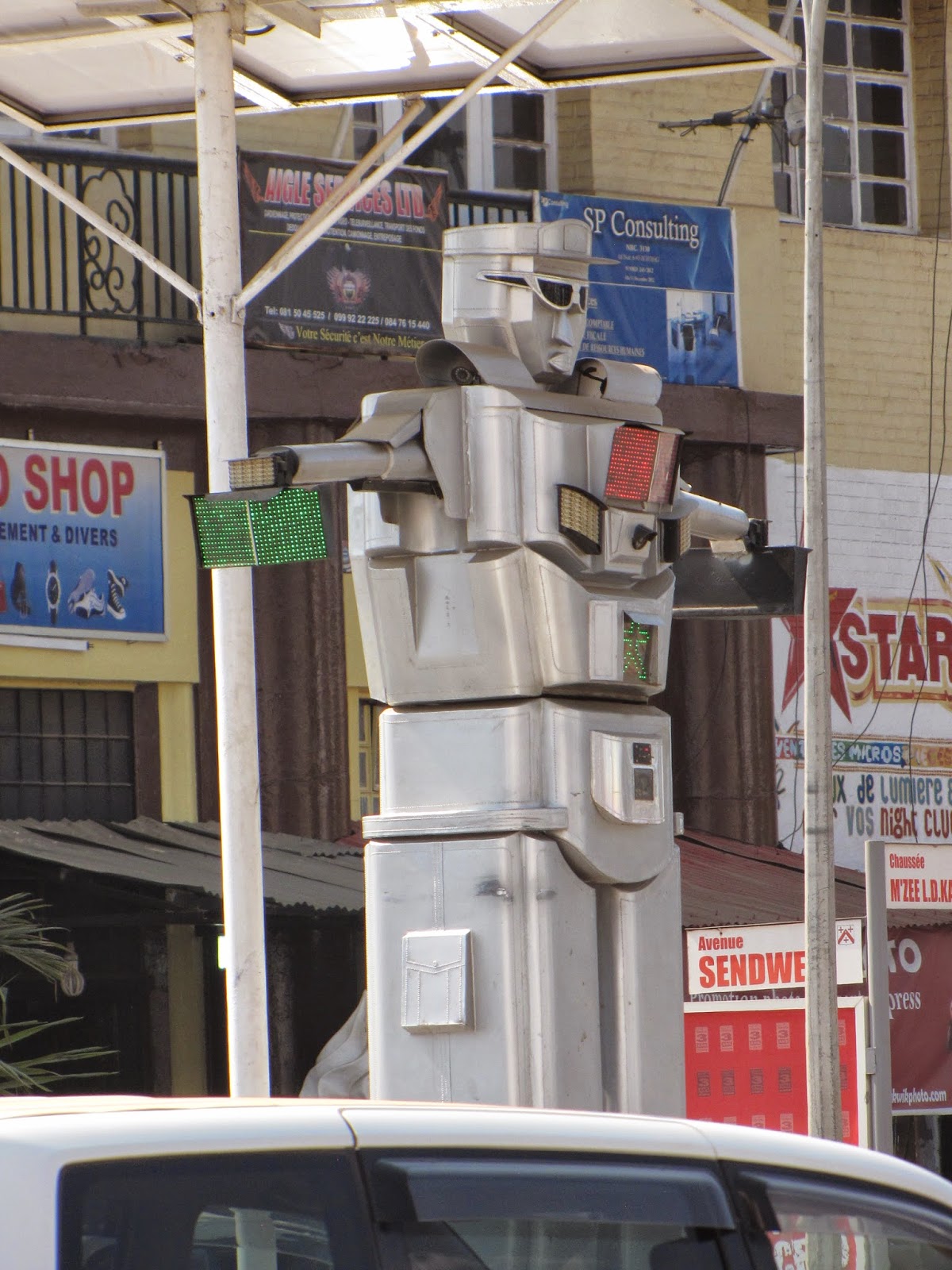 There is a giant robocop at the busy intersection near the Methodist building in downtown Lubumbashi. There is also an Italian-style flowing fountain and a sleek food court/shopping centre featuring South African chain restaurants (including Galitos and Pizza Inn). Every direction I look I spot young women wearing tight fitting jeans and fancy tops.  Am I tripping on malaria meds or has reality shifted?

I've been coming in and out of Lubumbashi, DR Congo since 1995. It is the first big city after crossing the border from Zambia and the capital of Katanga, so pretty much a required entry point for getting to the United Methodist conference of North Katanga. Since Lubumbashi is a transit town for me, I'm only here a handful of days each year.  This has created a surreal time-lapse photography experience as I've watched the city change.

There was a time that this city depressed me--everything was rundown like out of a post-apocalyptic movie and the vibe was a mix of paranoia, bitterness, and an exhaustion that comes from barely surviving. Later, the city stressed me out--chaos, crazy cars, corruption and cruelty. The vibe was that of those hustling to climb out of their poverty by any means available. My North Katangan friends who had moved to this sprawling city with dreams of financial success were suffering more than they suffered back home.

Today, however, as I wandered around downtown and rode out to dine at a friend's house on the other part of town (the road was now paved all the way there!), I thought to myself how alive and healthy the city seemed.  I marvelled at the building renovations, new construction and beautification efforts. Even on the radio there was an anti-littering public service announcement. 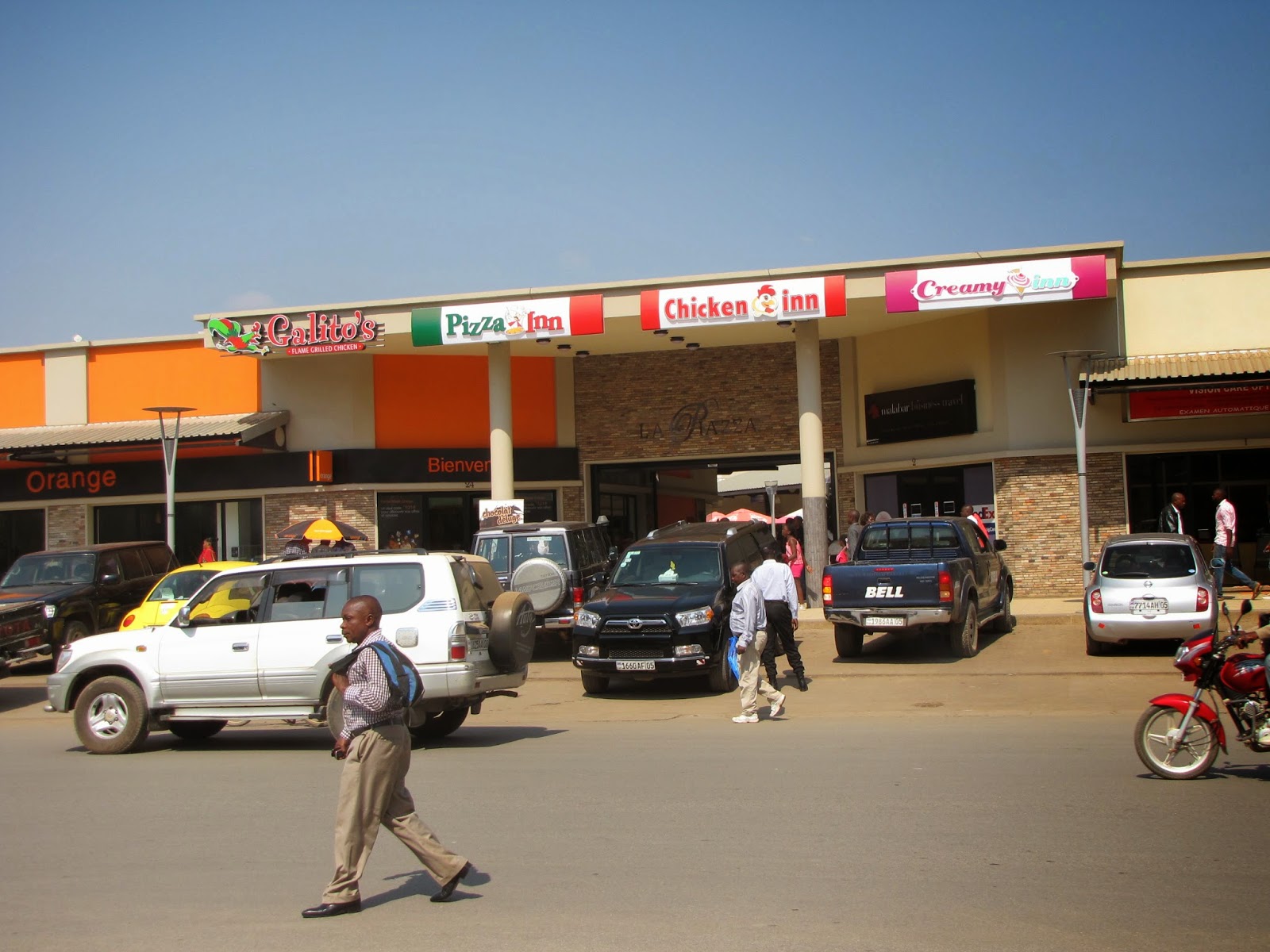 Countless new businesses catering to the emerging middle class. It occurred to me that I need to rethink my wardrobe for next time; I was clearly the least fashionably dressed woman on the street.

Today I started seriously thinking that I would enjoy living in Lubumbashi... now if I can only convince the USA government to reopen that consulate here they closed years ago so that my husband can be the first to apply for the job. ;)