On August 1st the U.S. Foreign Service’s summer 2014 bid list is scheduled to be released. We are halfway through our second assignment.  If you know how the Foreign Service works, then I’ve just told you everything you need to know about my husband’s current state of mind. If you don’t, well, let me try to explain a few things.

The U.S. Foreign Service is like a giant game of musical chairs.  Every few years every officer has to vacate her/his job and find another one. It doesn’t matter if you loved the job and were fantastic at it, once the music starts it is time to move. The first two rounds the powers-that-be cut you some slack and help you find your next post. After that, the game gets a lot tougher.

On a pre-announced date you are able to download a long list of upcoming job vacancies. It is up to you to figure which of those jobs are realistic options (do you have the required skills and experience or time to get trained?), research which jobs you’d actually want to have (it helps to have googling skills and contacts with the inside scoop on office dynamics), and apply to your favorites (yes, this means resume overhauls, cover letters, wooing e-mails, interviews, etc).  You’ve got to act fast because your peers are doing the same thing, and woe to the slowpoke.

That brings up another oddity of the Foreign Service.  While in most professions one’s peers are also in some sense one’s competition, the FS takes this to another level.  Networking is everything. You need a positive corridor reputation and friends advocating for you in order to get selected for your preferred posts. But, this is an up-or-out institution, and sometimes you and your friends will be competing for the same job. Did I mention that in the Foreign Service the bulk of your social life activities tend to include colleagues (and their spouses and kids)?  There can be pressure-cooker moments—some of which are the stuff of Foreign Service legend.

So, since I have your attention, may I take this moment to tell all of my readers who are in the Foreign Service that my husband, Stuart Denyer, is incredibly awesome? 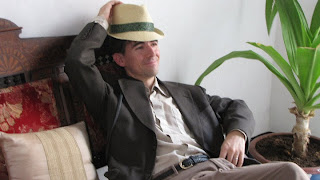 Stuart Denyer is a romanticized version of an old-school diplomat. He’s dapper and chivalrous, never snaps out in anger, knows his stuff, always has your back, earns the love and respect of local staff, learns quickly, never lets others take the fall for his mistakes (and will discreetly help you with your problems), plays the piano at parties and even stays late to help clean-up. Don’t interpret his mild manner and humility as a sign of weakness. His impressive collection of State Department awards does his bragging for him.

Stuart is smart, hardworking and loyal. The only thing wicked about him is his sense of humor. As one who has been his wife for 6 years and his ballroom dancing partner since 1997, I can assure you he’s in a class of his own.

So I guess what I’m really trying to say can be summed up in song by Fred Rogers:

Posted by Taylor Walters Denyer at 5:05 AM