It's National Day season here in Algiers; the time when many of the embassies try to squeeze in their biggest diplomatic event of the year (celebrating their Independence Day, Queen's birthday, or some other patriotic holiday) after the winter cold/rains and before the start of Ramadan, when diplomatic functions can't start until after sunset. There are so many of these events that a friend of mine laughed that she had gone to ten of them in just five evenings!

Being both a foreign service spouse and a member of a choir whose memberships includes several high-ranking diplomats (led by the British Ambassador), I got to hear--and rehearse-- a number of National Anthems this week. In fact, I was even drafted to be the soloist for the USA's Anthem for their event (had never analyzed until then why that song is so tricky to perform).

I found a sort of spirituality in attending the patriotic celebrations of others and singing their anthems with them.  In fact, this week reminded me of the ritual of Passing the Peace in church.  Sure, we have our differences and it is frequently difficult to get along, but these embassy receptions aren't simply parties for diplomats, government officials, and key contacts just as Passing the Peace isn't merely shaking hands.   It is about setting aside our conflicts for a moment and honoring each other.  And if only for just that evening, a world where there is true friendship between all our countries seems possible. 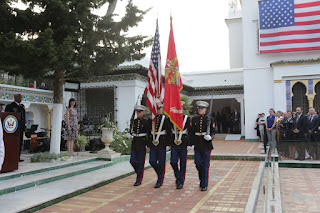 For obvious reasons, we only sing/play the first verse of the Algerian Anthem at all these events.

Posted by Taylor Walters Denyer at 1:31 AM