Luxury Do-Gooding (Or, how my hubby got me to agree to travel by Rovos Rail)

In my second trimester of pregnancy, my husband was serving as Vice-Consul at the U.S. embassy in Lusaka. Since Zambia did not have hospitals that met the U.S. government’s standards, the embassy flew me down to Pretoria for a high-tech check-up.  And, since ‘visit Cape Town’ and ‘ride on Rovos Rail” was on my husband’s bucket list, he somehow turned my medevac into a vacation with a half-day stop at a doctor’s office.


Cape Town, I was surprised to realize, is a remarkably beautiful city.  As in—Wouldn’t it be nice to retire here—city.  City parks and trails along the coastline.  Crashing waves and sandy beaches. Boardwalk cafes, great architecture, museums—even an aquarium! We stayed at a charming B&B and toured the town on a double-decker open-top bus. Rode the tram to the top of Table Mountain for a stunning panoramic view.  Yes, there are shantytowns on the periphery and unresolved social tensions, but compared to all the other places in Africa where I’ve been, Cape Town was like another world.

Then, we took Rovos Rail from Cape Town to Pretoria. This is the same Rovos that offers a Cape Town to Cairo trip for the uber-rich. Just two days on Rovos was a major splurge for us (I actually don’t even know how much we spent—Stuart refuses to tell me, although he swears he negotiated a special price).  Rovos, for those who don’t know, boasts being the most luxurious train in the world.

“Recapture the romance of a bygone era as you step aboard the reconditioned wood-panelled coaches and enjoy fine cuisine in five-star luxury.”

I admit it was pretty darn luxurious.  There was that voice inside me, though, that nagged isn’t this wasteful narcissistic spending?  Shouldn’t we be pouring every dollar we can spare into Friendly Planet Missiology or, at the very least, a college savings account for our unborn child?  With all the visits of friends and family we received during our two years in Zambia, we had been going on a number of expensive safaris and road trips. I felt like we were hemorrhaging money. Wasn’t it time to throw on the brakes and say enough?!


My husband responded that I was being inconsistent in my logic.  Wasn’t it I who had insisted he read Dead Aid? Hadn’t I agreed that the best way to combat poverty in Africa wasn’t via charity but through purchasing the goods and services of African-owned and operated businesses? By my own arguments, wouldn’t this mean that if one really cares about sustainable development in Africa one should spend serious cash as customers of the tourism industry?  Hadn’t we deliberately been choosing socially responsible companies whose profits went back into the local economy?

I didn’t have a good reply.  All my economics training suggests that he is correct, so why did it feel wrong?

It has been ingrained in many of us that doing-good requires sacrifice.  We must give things up in order to improve the world. We donate to charities, take ‘alternative spring breaks,’ and join in boycotts of stores and restaurants.  In exchange, we get the satisfaction of making a difference. Sometimes, we are so emotionally moved by our volunteering that we comment that we received more from the experience than we gave  (which I think is often true, and this opens up a whole other conversation about ways we exploit poor communities). 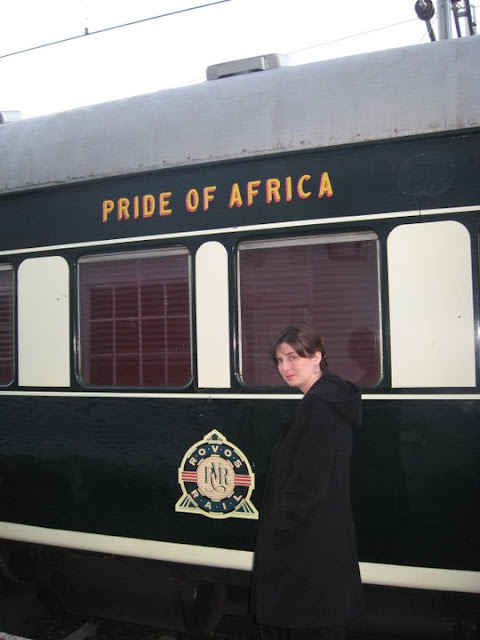 But sometimes, we can participate in win-win exchanges. Sometimes doing what’s good for the health of the community can feel indulgent. We can pamper ourselves by going to an eco-friendly retreat center and spa and have a tasty lunch at a café that purchases from local farmers. We can buy theater tickets to support the arts, and, yes, if we happen to find ourselves needing transportation to Pretoria, we can go in style via a family business that started as a foolish pipe dream and now provides regular paychecks for hundreds of households.