In my forth month of pregnancy my husband Stuart, anxious that our time in Zambia was coming to an end, insisted that we take a big road trip to explore Northern Zambia.  The adventurous week on the road produced many amazing stories and ended with an exciting finale (i.e. our flipped and totaled SUV on a bad remote road).  I should write about them in detail one day, but for now I'll share Stuart's description of the route we took.  If you ever have the chance, we suggest you try it. 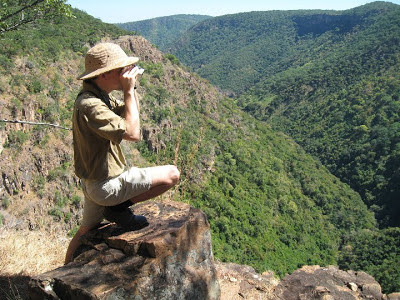 The Great North Road.  Its imperial title evokes classic adventure the length of Africa.  While the Cape Town to Cairo route of Cecil Rhodes’s dreams never quite came to fruition, the section of it in Zambia is the country’s equivalent of Route 66, and links all Zambia has to offer.  Heading north from Lusaka, one will see spectacular waterfalls, ancient cave drawings, a Bemba chief whose great grandfather buried Dr. Livingstone’s heart on his land, a grand colonial estate, a tropical beach resort, historic roadside monuments, and this author’s favorite spot in Zambia: the hot springs where one can sit in the effervescent warm waters beneath a magnificent African night sky.

Here is one possible itinerary taking the Great North Road and beyond to explore northeastern Zambia:

Overnight at the Forest Inn.  A simple but charming lodge with cottages in the forest, just off the main road.

Day 2
Leave early in the morning to drive northwards.  Just past the Serenje turnoff, stop at Kundalila waterfalls.   Hike down to the base of the falls and back.  (An on-site guide can point you in the right direction after you pay the nominal entrance fee.)  Consider a stop at either Nsalu or Nachikufu caves (probably not time for both) to see prehistoric rock paintings.  (You will need the on-site guide.)  Past Mpika, turn left off the Great North Road when you see the signs to Shiwa Ngandu.

Famed Shiwa N’gandu estate is a magnificent English country manor house dropped into a remote part of Zambia.  Its history is thoroughly documented in Christina Lamb’s Africa House, which tells the story of Stewart Gore-Brown, a man with big dreams, and still the only white man to receive a state funeral (post independence) in Zambia.  It is a working farm run by Gore-Brown’s grandson, Charlie Harvey and his wife Jo.

Overnight: Shiwa N’gandu estate.  The cost is high, but then this is not really for average travelers needing a bed.  It’s for history lovers. Dining with the Harveys in their beautiful dining room is akin to joining a family dinner.

Day 3
There is a choice of activities on the estate.  Go on a safari drive with Charlie; no, you won’t see roaming lions, but where else can you do a safari with three beloved ridgebacks straining past you to see out, with a Jack Russell on your lap?

Go for a horseback ride with Ms. Harvey up to Gore-Brown’s hilltop gravesite, or hike up to the second highest peak in Zambia, just as Dr. Livingstone did.  See their working farm, or simply sit in the library, sipping sherry, and delve in to Gore-Brown’s original photo albums, or inspect his diaries in the tower room.

In the later afternoon, depart the main house and drive down the road to the adjoining Kapishya Hotsprings, owned by Charlie Harvey’s brother, Mark.

After an excellent family-style dinner at Kapishya, including chatting with the Welsh manager and other guests, sit in the bath-tub temperature waters of the hotsprings.

Overnight at Kapishya Hotsprings where they have a lovely pool and gardens.
Day 4
Drive west on the dirt, but very well graded, road leaving Kapishya.  At the paved road, turn right (north) towards Kasama.  Just after the Chambeshi bridge (from which one can see on the left the remains of an older bridge that was bombed out during the Rhodesian conflict of the 1970s), make a turnoff on the left toward the old bridge to visit the Von-Lettow Vorbeck Memorial, the site of the final shots of W.W I.  (It took awhile for word of war’s end to reach the German army here.)  Arrive in Mpulungu and leave your car (as directed by the lodge where you will stay). Take a lodge skiff to the lake resort.  [Caveat lector: The Isanga Bay lodge skiff does not run after dark; we arrived just a little bit too late and were forced to overnight in Mpulungu, a slightly chaotic port town.]

Day 5
Visit Kalambo waterfall (2nd tallest in Africa; twice the height of Victoria Falls).  The lodge can arrange a boat to get closer and from there it is a rather strenuous guided hike that takes several hours.  (Those less fit might consider just driving to the falls after leaving Lake Tanganyika).

Enjoy swimming and sunning from the lodge’s sandy beaches on Lake Tanganyika.  (The owners promise it is free of crocodiles and bilharzias.)

Day 6
Take lodge skiff back to Mpulungu.  Those with an extra week in their itinerary might want to take the MV Liemba from Mpulungu to Kigoma, Tanzania.  The Liemba, a German-built steamer, has been plying these waters for almost 100 years and visits Mpulungu once a week.  Sunk by the British during W.W. I and then raised from the bottom to serve as a passenger and cargo ferry, this ship (along with two other German warships) served as the inspiration for the warship featured in the story “African Queen.”  Aside from the Liemba, it’s also possible to negotiate passage on one of the cargo ships.

In Mpulungu, on a hill above the port, visit Niamkolo church, established by the London Missionary Society and the oldest church in Zambia.  (The stone church is currently missing a roof).  Near here is also the remains of the Good News, the first missionary boat, although we were unable to locate it.

From Mpulungu drive to Mbala (formerly known as Abercorn) to visit the Moto Moto museum, the best collection of Zambian African history after the Livingstone Museum.  (If you didn’t visit Kalambo Falls earlier, you could at this point drive to the falls, located on the Zambia-Tanzania border.)

Drive south to Kasama.  On the eastern outskirts of Kasama, visit Mwela Rocks.  A guide at the entrance will join you in the car to point out various ancient cave drawings, including unmistakable fertility depictions.  Sadly, some of the cave drawings were lost in the 1970s as the Chinese builders of the Tazara railway thought the rocks had more value as railway trestles.

Overnight at Thorntree Guest house, a simple but pleasant establishment run by a former British schoolteacher.

Day 7
Drive westwards toward Mansa.  Not far outside Kasama, stop at Chishimba Falls, a highly accessible set of three dramatic waterfalls.  At the middle waterfall, with some caution, one can walk across the rock plateau next to where the water goes over, for a classic African vista down the gorge.

[Caveat Lector: The road as far as Luwingu is paved.  Thereafter, from Luwingu to Mansa, the road deteriorates into a dreadful rocky mess.  Though he was not driving at the time, the author’s car spun out of control and rolled over.  This sort of thing can put a damper on a holiday so one may wish to avoid this road.  In fact, it may have been overly ambitious to think one could drive from Kasama to Samfya in one day, especially with a stop at Chishimba Falls]

Overnight at Bangweulu Bay Lodge (just outside Samfya), one of the few such lodges owned by an African-Zambian.  Enjoy hot tea and biscuits watching an orange moon rise over Bangweulu lake, the largest natural lake in Zambia.  The next morning, sit on the sandy beach and watch a shimmering sunrise over the lake (but you may not want to swim in the lake).

Day 8
Drive south on the excellent road that cruises past the Bangweulu wetlands (and passes over the longest bridge in Zambia).  Just before Kasanka park (known for the spectacular bat migration, at the right time of year) you will see a turnoff on the left for the Livingstone Memorial and Chief Chitambo’s Village.  Chief Chitambo’s palace is just one km from the main road and it’s well worth it to have an audience with this English-educated and forward-thinking chief.  His great-grandfather was with Dr. Livingstone when he died.   Any history aficionados will consider the 25 km dirt road (in good condition) well worth it to reach the actual monument where Livingstone’s heart and other organs are buried.  (The rest of him was taken back to Westminster Abbey in London.)  After returning to the main road, continue southwards, rejoining the Great North Road, towards Mkushi. 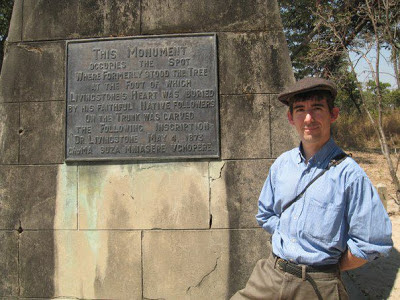 Overnight at the Loza Guest House, a renovated British farmhouse that provides excellent meals.  It’s a 10km dirt road off the main road.  An alternate, simpler lodging is Serenje’s Mapontela Guest House, which was started by a former Peace Corps Volunteer.

In Kabwe (formerly known as Broken Hill) there are two sites of interest:  Heading southwards in the middle of town, take the parallel road one block east of the Great North Road.  Outside the stately government provincial building there are two monuments: a war memorial and a memorial to the discovery of Broken Hill Man, an important archeological discovery linking apes to us.  Just past this is the well known Big Tree (represented on the 50,000 kwacha note), a well-known meeting place in Kabwe.  Just after leaving Kabwe, on the right, is the Fig Tree café, a pleasant spot to get a milkshake or lunch.  (Note: Fig Tree is closed on Sundays.)

For more photos of the journey, visit Taylor's Facebook album
Posted by Taylor Walters Denyer at 5:16 AM