Last week I was honored to be invited to a Xeedho ceremony for Kanni, a Djiboutian friend of mine who was recently married. "What's a Xeedho?" you ask.  Well since it was new to me too, I'll borrow the explanation she gave me:

"The xeedho is a wooden eating bowl commonly found in all nomadic households in Djibouti. At weddings, the bowl is filled with a palatable dish (called the muq-mad - which is the beef jerky Somali style) prepared of sun-dried meat which has been fried in butter and seasoned with spices and to which dates are added in large quantities. The muq-mad, recognized to be a delicacy, is a nutritious, life giving foodstuff and is especially appreciated by the nomadic community. It lasts for a long time and thus serves as a reserve food in nomadic households, often being given as a treat to distinguished guests.

At the xeedho ceremony, the basket is given a human form. It is “clothed” in a similar attire to that of the bride, brought to the wedding by her relatives. The bowl with the dish is usually stored in a basket consisting of two conical baskets joined at right angles, covered with a piece of tanned leather or white cloth, nicely decorated with cowrie shells and tied together with leather strips and cords in a very complicated way. Under the direction of an unmarried woman "presiding" over the ceremony, every young male of the groom's family is called to try to untie the rope. The woman overseeing the ceremony watches carefully each young man's attempt to find the knot and untie the rope. If the woman judges the attempt too brusque, or unconvincing, she sentences and applies a form of "punishment" varying from reciting poetry to dancing. When the ceremony is successfully finished, people join together to feast and celebrate. The ceremony is celebrated on the seventh day of the marriage. It concludes the whole wedding ceremony. The xeedho is a gift given by the mother to her daughter and son in law and the goal is to promote social cohesion." 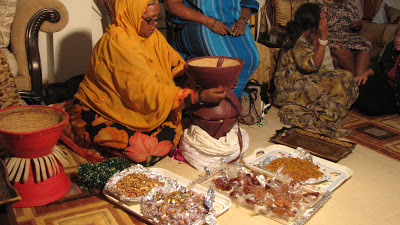 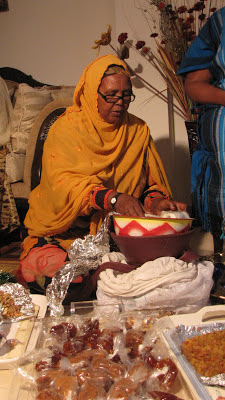 The xeedho ceremony I attended was a ladies-only event (with the exception of a brief appearance of the groom and a couple cameramen who came to capture the memory) and primarily done as a way for her to include her foreign friends--most of whom weren't at the wedding-- in the celebration of this new chapter of her life.  If I were to sum it up in one word I'd say "Delicious." 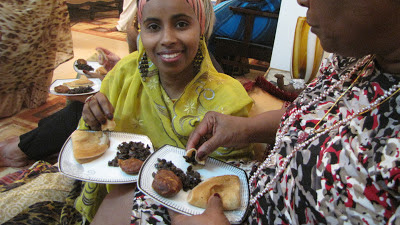 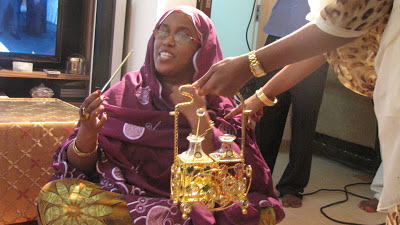 Posted by Taylor Walters Denyer at 2:04 AM