Q&A #3: What's this I hear about a new training center? 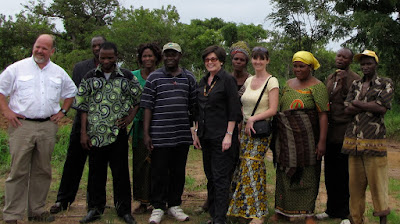 Wednesday evening December 1, 2009 I received a path changing e-mail. SIFAT’s Executive Director Tom Corson and International Team Coordinator Peggy Walker were in town and looking for the Methodists. They had come to see the land The United Methodist Church (UMC) was purchasing in Lusaka and discuss plans for the new SIFAT training center that would be built on it. Sadly, their primary contact in Zambia, Rev. Jean Kalonga (Bishop Katembo’s assistant and de facto bishop of Zambia) had unexpectedly died while they were in route. Jean hadn’t had a chance to share his correspondence with anyone, so no one in Lusaka was expecting SIFAT’s arrival. SIFAT’s SOS e-mail bounced around cyberspace until it was forwarded through the Methodist connectional system to me. They only had a couple days left in town and did not know whom to call. This was a disaster in the making, but thankfully my Internet was working that day.

There are things you can do in The UMC in central Africa that are near impossible in the USA. One of them is rapid mobilization. SIFAT wanted to meet with the district superintendent, key church leaders, the lawyer (real estate agent) and see the land. No problem. I made a few “Cancel your plans for tomorrow cause SIFAT is here” phone calls and texts, picked up Tom, Peggy and Isaiah (who is from Bishop Katembo’s office in Lubumbashi) and we all gathered at the District Superintendent’s house by the next morning. Several routine tasks were taken care of while SIFAT was with us (like kneeling before the chieftainess for her approval of the land deal and briefing the member of the Lusaka District on the project’s timeline). What came next was where it got complicated.

SIFAT was able to build this training center because their connections at University of Alabama’s Engineers Without Borders (EWB) had connections with the leadership of B.L. Harbert, the construction company that won the contract to build the new USA embassy complex in Lusaka. Very long story condensed, Harbert would donate skilled labor, use of heavy equipment, and a large amount of construction materials. EWB students would make blueprints for the facility (as graded class assignments) and come in May 2010 to help start building it. The catch was that there needed to be a piece of land to put the center, and the owners of the land needed to have all their paperwork/permits in order. SIFAT turned to The United Methodist Church with an offer: if the church would purchase the land and take care of the paperwork, SIFAT would have the center built on it. The land and buildings would then belong to the UMC and could be used in a multitude of ways on days SIFAT training events weren’t being held. Sound too good to be true?  Well, there was a catch.

It turned out purchasing property in Zambia was the easy part; obtaining an actual title deed is tough and time consuming. Everyone we asked for advice said if we worked hard perhaps we’d succeed by 2011, but we had until April 2010 at the latest or the whole deal would fall apart. From Dec-April, the District Superintendent with the support of district leaders (especially our lay leader’s husband Chris) turned this ‘hopeless’ task into his full time pursuit. As soon as I returned from Christmas and clergy meetings (RIM) in Indiana, it became my all-consuming work as well. I’ve lost track of how many days were spent at the Ministry of Land or the number of road trips made to file forms in regional offices.

At the Zambia Provisional Conference Executive Committee meeting in Kitwe (5 hours north of Lusaka) the end of February, we launched a conference-wide prayer and “who do you know in the government who could help us?” campaign. Not long after this, I finally managed to get a meeting with the Commissioner of Lands who assured me that we would be ready in time for the May groundbreaking deadline. True to his word, our offer letter arrived just in the nick of time.

EWB, SIFAT (along with a pastor of an Alabama conference congregation that had contributed to the land purchase) and Isaiah (representing Bishop Katembo’s office) arrived the second week of May. Together with a large team of United Methodists from across Lusaka, we began the building process.  There is still a long way to go on this project, but Thanks Be to God we are out of the tunnel. 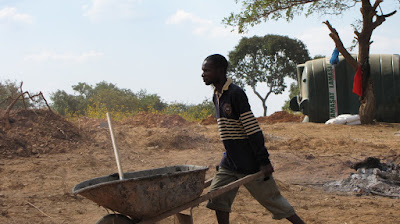 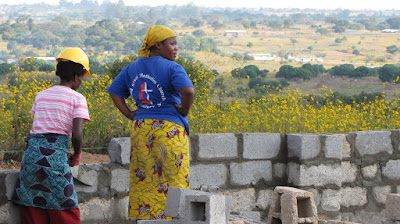 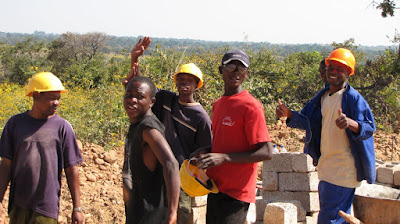 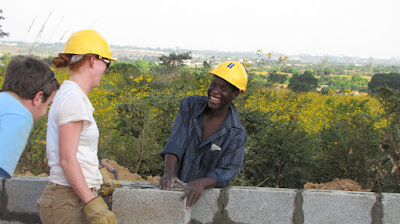 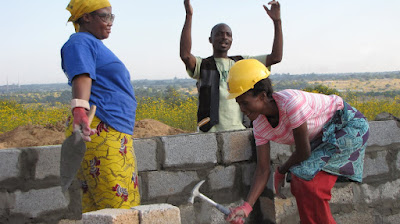 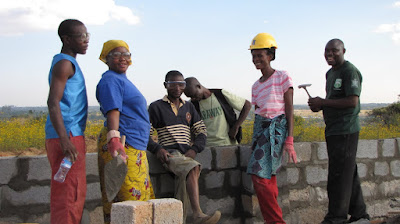 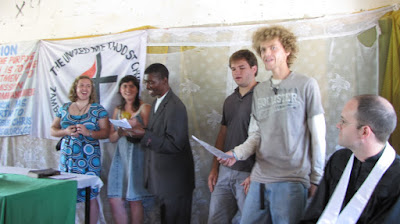 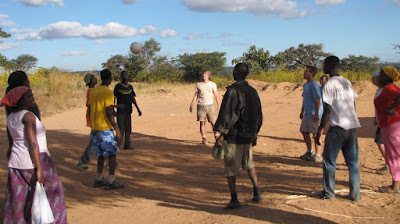