When we first relocated to Zambia in September 2009, I figured that I would be spending most of my time across the border in DR Congo, since that was my primary motivation for moving here. God seems to have had a different plan.

As a protocol abiding United Methodist pastor, I informed the District Superintendent of Lusaka of my arrival as soon as I obtained a phone and his phone number, which took some creative thinking to obtain since no one I initially asked had a clue as to the location of the local United Methodists (minimal signage since they all meet in rented classrooms except for the one Zimbabwean immigrant congregation that still worships in Shona).  To my surprise, DS John Ilunga, armed with only knowledge of what neighborhood and street I lived on, rounded up a welcome team and showed up at my gate the very same day I called him. Unbeknownst to me, his family and the church’s leadership team were feeling overwhelmed and had been praying for God to send them someone to help…and then I showed up. [I know how that sounds to some ears; I eschew reinforcing the destructive belief that salvation comes from America/Europe, but what they were wanting was a flesh & blood mediator, and that role is best played by an outsider] 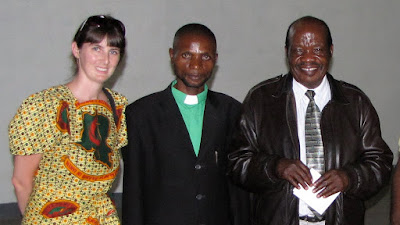 DS John immediately put me to work as an itinerate preacher with the focus on increasing morale and the spirit of unity in and between the congregations. Each Sunday I was sent to a different congregation in the district until I had been to them all—and then circuit rider style I started again.  I itinerated with the DS and an interpreter (interpretation is a challenging task in these polylingual communities—even some of our local pastors use interpreters).  A few weeks into this Brian, my main interpreter, told me that he was getting strong feedback from congregations. They suspected that he was telling me their secrets since my sermons were directly addressing their specific issues. He got himself out of hot water by explaining that I was following the lectionary and it must simply be the Holy Spirit speaking through me.  I suppose that this is true; the Spirit has been shifting my worldview for some years now through profound friendships with church leaders from Congo, Zimbabwe, and Zambia. I have been beginning to comprehend the way in which scriptures and stories resonate with the common struggles here.  And, quite frankly, the Biblical stories burst off the page here in a way I had never experienced back in the USA.

In addition to preaching, I am involved in church, district, and conference meetings and training events (even hosted a district clergy/spouses dinner at my house).  Co-officiating funerals is sadly a regular honor. [I plan to do a separate blog post just about funerals]  The turning point in my work in Lusaka happened in early December right after the death of Rev. Jean Kalonga when I received an e-mail about the arrival of SIFAT. The SIFAT/Friendly Planet/UMC collaboration I'll save for the next post.