Turning the World Upside Down: Reading the Beatitudes on All Saints Day

Adapted from sermon preached Nov 2020 in The Church of England's congregation in Ljubljana, Slovenia 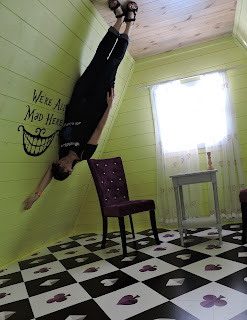 One of the perks and challenges this past year of being a Methodist pastor serving in an Anglican congregation has been getting acquainted with a different hymnal full of songs I had never heard before. This past week I learned three more All Saints Day hymns, including one often known as Turning the World Upside Down.

Turning the world upside down. I don’t know about you, but that’s sounds great to me. I think about the time Jesus started raging and flipping tables in the temple courts, driving everyone out with a whip made of cords. The Gospel accounts tell us that Jesus especially targeted the tables of money changers and those selling doves, calling the merchants robbers.

Why those tables more than others? Well, the wealthy didn’t need to go to a currency exchange booth in the temple with its high transaction fees. They had no shortage of cash on hand. And the wealthy weren’t the ones purchasing overpriced doves to offer as a sacrifice. That’s what the poorest of the poor folks did when they couldn’t afford a lamb let alone a cow. The merchants Jesus lashed out at weren’t selling the first century’s version of cookies and quilts in the church foyer. This was about those in control turning having access to God’s love and mercy into a financial transaction that was out of reach for way too many people. Society’s system of exploiting the most vulnerable extended into the realm of institutional religion, sending the message to those unable to pay these exorbitant fees that God does not hear their prayers, forgive their sins, or even care about their suffering.

Scholar Richard Beck writes that Christ’s righteous fury about the exploitation of the poor is “what causes Jesus to engage in a protest action that shuts down the financial system of the city during the annual peak of its commercial activity, where he "would not allow anyone to carry merchandise through the temple courts" during the Passover week. An action akin to shutting down the Wall Street trading floor or shopping during Black Friday.”

So why does The Church of England’s hymnal include Turning the World Upside Down in its list of All Saints Day hymns? What do its lyrics have to do with the lectionary's Gospel reading for the day? Everything.

Let’s turn back in the story to Matthew 4:12-13, where we are told that “when Jesus heard that John had been arrested, he withdrew to Galilee. He left Nazareth and made his home in Capernaum by the sea.” Siblings in Christ, when Jesus heard that his cousin John’s prophetic ministry of calling out to the masses and preaching repentance was at its end, he knew it was his time to step up. He left his hometown of Nazareth, but didn’t go straight to Jerusalem. He went instead to the fishing villages surrounding a large lake known as the Sea of Galilee, way up to Capernaum at the far north end. “From that time Jesus began to proclaim, 'Repent, for the kingdom of heaven has come near” (Matthew 4:17). It is there that he began his grassroots organizing work, walking along the lakeshore and encouraging people to leave their boats and follow him.

Matthew tells us that “Jesus went throughout Galilee, teaching in their synagogues and proclaiming the good news of the kingdom and curing every disease and every sickness among the people. So his fame spread throughout all Syria, and they brought to him all the sick, those who were afflicted with various diseases and pains, demoniacs, epileptics, and paralytics, and he cured them. And great crowds followed him from Galilee, the Decapolis, Jerusalem, Judea, and from beyond the Jordan” (Matthew 4:23-25). This is the point in the story where today’s Gospel reading begins:

“When Jesus saw the crowds, he went up the mountain; and after he sat down, his disciples came to him. Then he began to speak, and taught them” (Matthew 5:1-2).  The message Jesus preached is what we call the Sermon on the Mount, and the opening portion we read today we call the Beatitudes. There on a rolling hillside overlooking the water, Jesus spoke not to the religious gatekeepers, but to the people on the margins.

Blessed are the poor in spirit, for theirs is the kingdom of heaven.

Blessed are those who mourn, for they will be comforted.

Blessed are the meek, for they will inherit the earth.

Blessed are those who hunger and thirst for righteousness, for they will be filled.

Blessed are the merciful, for they will receive mercy.

Blessed are the pure in heart, for they will see God.

Blessed are the peacemakers, for they will be called children of God.

Blessed are those who are persecuted for righteousness’ sake, for theirs is the kingdom of heaven.

Blessed are you when people revile you and persecute you and utter all kinds of evil against you falsely on my account. Rejoice and be glad, for your reward is great in heaven, for in the same way they persecuted the prophets who were before you.

Over the centuries, power holders have twisted these words, hypocritically telling those whose backs they stand on that good Christians are supposed to be content with being poor, meek, and persecuted—that they should be happy in their suffering because they’ll be rewarded after they die.

But that is not what Jesus was saying. Prof Lance Pape writes that “the list we find here is in the indicative mood, not the imperative. It is description, not prescription.” And, Prof Raj Nadella asserts that “the Beatitudes do not glorify situations of suffering but announce reversal of fortunes for the oppressed.”  Nadella points to the semantics of the text in its original language. Verse four, for example, is poorly translated in most anglophone Bibles. He writes that “blessed are those who mourn, for they will be comforted—does not fully capture the force of the Greek verb at the end—parakleytheysontai. . . , [which] is derived from the Greek word paraclete, which was used in courtroom settings in the first century Greco-Roman context. It referred to lawyers and advocates and has the connotation of interceding on behalf of those who need assistance.” Jesus isn’t saying that those who mourn will get a comforting hug, he’s saying they will get justice and reparations.

Nadella suspects that the ambiguity in the grammar about who exactly will be bringing about justice for these whom Jesus calls blessed is deliberate. Many assume it is God, but it could also be read as marching orders to Christ’s followers there on that hillside, including the persecuted themselves. Nadella writes that “many of the Beatitudes place the second part in the active voice…suggesting that the oppressed will participate in their own liberation. Rather than turn the afflicted and the oppressed into objects of our compassion and advocacy, the Church must acknowledge their own agency and actively work with them to facilitate the reversal of fortunes Jesus has promised them.”

Turning the world upside down. Every saint that we celebrate on All Saints Day answered a call to strive to live a life consistent with the values of the Kin-dom of God, and, in doing so, they participated in the sacred work of turning the world upside down. May we honor their lives and show our love for God in our walk and our talk by stepping up—'cause it is our turn.

Hymn: Turning the World Upside Down

Posted by Taylor Walters Denyer at 4:39 AM