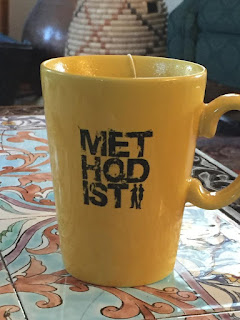 I’m not going to mince words. What happened on the floor of The UMC’s 2019 Special Session of the General Conference (GC2019) was not Christian conferencing. It was an ugly live-streamed political battle that has now been reported on by nearly all the major news outlets in the USA as well as a number of international news networks. There are United Methodists all over the globe who love their church who are grieving deeply today. Within my network of friends, I have already received a prayer request for a young adult who attempted to end their life after being devastated by the results of GC2019.

I write to you today as someone who does not take what has happened lightly. And so I say that if you need to take some time to grieve, take it. Grant yourself permission to grieve deeply, for we only grieve things that are precious to us. And while you grieve, know that you are not alone. Know that the church you love hasn’t gone anywhere. The church is the people, and the community who loved and affirmed last week is still the community who loves and affirms today.

Often when I would debrief with my late father about a difficult situation, he would respond, “Besides that, Mrs. Lincoln, how was the play?”*  And so, I thought it may be encouraging to share with you that, in other ways, General Conference was wonderful.

GC2019 was a gathering of passionate pastors and social activists who have refused to give up their claim to the name United Methodist. For me, it felt like I was in the show This is Your Life. During this compressed window of time, I reconnected with so many old friends—many I hadn’t seen in over a decade— from nearly every chapter of my journey as a United Methodist. It was as if the Spirit was running a defrag program on my life’s narrative as well as introducing me to new friends with whom I plan to work closely in the coming years.

That is to say, kindred spirits spent this week at GC2019 getting uber-networked (UM connectionalism!) and making plans for our future together. Each evening we prayed, sang, and studied scriptures as a family. These sacred gatherings were beautiful. My cup overflowed with the reassurance that the church I had mourned losing was indeed still alive, and there was still a place for me in it.

My siblings, there is a place for you too in this community.

As we prepare to begin this time of Lent, let us lament; let us confess; let us pray, and let us remember that we worship a God of new life and resurrection. Easter is coming.

*For my friends outside the USA: this is an old joke referencing the assassination of President Lincoln while he was at the theater.

Posted by Taylor Walters Denyer at 9:44 AM