Today’s scripture reading from the lectionary addresses an important yet uncomfortable topic. I’d venture to say that most of us are familiar with John 3:16—perhaps you can even recite it.  That’s the one that starts “For God so loved the world.”  But 1 John 3:16—probably not so much.  So let’s pause a moment and tune our ears to hear verses 16-18 again:

16 We know love by this, that he laid down his life for us—and we ought to lay down our lives for one another. 17 How does God’s love abide in anyone who has the world’s goods and sees a brother or sister in need and yet refuses help? 18 Little children, let us love, not in word or speech, but in truth and action.

Wow. I wish that 1 John 3:16 were as well known and often recited as John 3:16. There is so much to unpack here, and the rest of that chapter packs quite a punch too.

It is easy to intellectualize a question to the point of inaction. Under what circumstances should we lay down our lives for another? How literally are we talking?  What sort of help are we to give to those in need and how much exactly? I mean, if I gave money to every person in need I encountered, then wouldn’t I become the one in need?

Theologian Samuel Wells made an assertion in a sermon called Rethinking Service that I believe is the key to transforming the kind of questions we ask and thus resulting in qualitatively different responses to when we see a sister or brother in need. Wells challenges our cultural assumption that mortality is the essential problem of human existence. When we think that death is the ultimate problem, we focus on attempting to solve issues that lead to an early death: malnutrition, sickness, lack of adequate housing or physical safety. And, yes, these are real problems which we are called to respond to, but not for the reason we tend to think.

When we view death as the fundamental thing to avoid, we structure our service and missional work with that narrow view. A town lacks clean water?  Dig a well! A hungry woman begging on the sidewalk? Give her food!  A young man needs surgery but has no health insurance? Launch a Kickstarter.  It’s not that such responses are inherently wrong, but do they come out of seeing the deeper need? Do they respond to the root problem or just its symptoms?

What if—What if we viewed the primary problem of the human condition that we seek to alleviate as isolation—that is, the problem of not recognizing that we belong to one another—of not feeling beloved?  How would that change our understanding of what it means to love our sisters and brothers in need in truth and action?

My Great-Grandma Jessie was a feisty woman. Being twice widowed, she knew a thing or two about what really matters. One day a sister-in-law came to her and said that Jessie’s two daughters were in grave risk of eternal damnation for they’d been seen wearing shorts.  “Well,” said Jessie “Guess I’d better buy me some shorts.” Grandma Jessie understood something profoundly important.  The most important question isn’t where we are going; it is who is going to be there with us.

My late father understood that too. Year after year he would gather a team of Congolese pastors and lay leaders and they would travel thousands of kilometers by bicycle deep into remote areas that had been decimated by violence and its after effects. Yes, the communities needed clean water, and medicine and food security and all the other things that pop into your mind. But what struck Dad the most when he sat and listened deeply to the United Methodist pastors appointed to these communities—the thing that was underneath all of the laments he heard—was the feeling of being forgotten—of being abandoned, discarded by the church and outside world as if they held no sacred worth.

Wells warns us that when we place our focus on alleviating mortality, we actually heighten isolation. Who of us here has ever received a gift that, while well-intentioned, left us feeling “Oh. You really don’t know me, do you?”  Are there some among us who have hosted a party or family gathering and worked so hard at offering hospitality that when the guests finally left you felt emotionally drained, having spent most of the time alone in the kitchen instead of in quality conversations?  You see, the problem goes both ways.  Much has recently been written on how popular efforts to give people things that they need to survive strip recipients of their dignity and their sense of belonging.  Giving to such initiatives may lessen our feeling of guilt, but they don’t fill the void within us; they don’t address our need to fully belong.

Belonging. Being seen and valued. Being fully accepted by an ever-expanding community that loves so deeply that they yearn to be there for each other—to laugh and cry together, to check in on each other, to share gifts, even to be willing to lay down their lives for each other---that is what God’s love abiding in humanity looks like.  That is what we strive to be for each other and the world outside our doors.  A community that does not think in terms of “us” helping “the needy” but as all of us together on this swirling blue marble we call Planet Earth, each with our own specific spiritual and material needs and gifts---recognizing the sacred worth of every person, and every tree, river and animal.

Sisters and brothers:  This is the love that calls to our innermost being. And this is what it means to be a disciple of Jesus Christ.
Amen 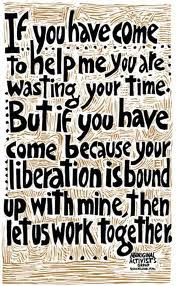 Posted by Taylor Walters Denyer at 6:42 AM