The Price of Rocks and the Glamorous Life

Unlike most married women in America, I do not own a diamond ring. Instead of a shiny rock on my hand, there is a delicate pearl (just what I'd been looking for) that I found on sale for $40. It sits next to a simple band that we found in a box of wedding rings at an antique shop.

Don’t misunderstand me; I am a girly-girl who loves getting dressed up and wearing pretty jewelry, and my husband would have presented me with something expensive when he proposed had he not known me better. Fortunately, he knows that when I look at the display windows of a shop that sells gemstones I become physically ill. All I can think about is where the rocks probably came from and wonder what underpaid (or enslaved) person suffered to obtain it. My mind whirls with the testimonies of Congolese friends who have described the horrific conditions of so many of the mines—of Indian slaves locked in containers when they aren’t being forced to dig and of small children risking their lives to find baubles for foreign brides. Why would I want all that blood on my hands, ears and neck? (Yes, I do recognize the irony of me writing these words on a laptop containing coltan, which was probably stolen from Congo and sold to buy more weapons)

You can imagine how I felt, then, when I ended up with a group of American women yesterday on a tour of a jewelry workshop with a mini-lesson on gemstones. I tried to be open-minded and optimistic. Earlier this year I toured one mine in Congo run by an American company trying to operate humanely. They had high safety and environmental standards and had even built houses, schools and clinics for the workers and nearby communities. Perhaps this store would reassure me that they knew exactly where their gemstones came from, and that the miners were well treated and fairly compensated for their work. Instead, the owners talked in circles in response to my questions. Sigh.

After the circle talking ended, the group went back to oohing and ahhing the shiny rocks spread before us. (Was I really the only one disturbed that they never said they maintain a clean supply chain?) We heard all about different kinds of stones, where they are found—turns out Zambia has the most valuable emeralds in the world—and how to tell the difference between a $50 rock and a $50,000 rock. Most of the time you have to look extremely closely and often with a microscope to see the differences. The gemologist placed before us rocks of various values so we could become better at recognizing the quality ones. She even showed us the current prize in their collection. You could buy a decent house for what they’ll probably get for that large rock. (I noted an uncomfortable grimace when I remarked on what the unnamed miner who discovered it would be able to do with his share of the profits.)

Next we were told about various tricks used to fool people—many of which can even trick experts. Did you know, for example, that companies frequently irradiate stones to darken their color, since a darker shade can increase the price by thousands of dollars? We were told to ask stores how long ago their stones were irradiated; apparently they ought to sit for a year for their radiation levels to decrease.

Now here’s the thing: Say what you will about me, but I just don’t get it. If you placed before the average person two trays: one with thousands of dollars worth of cut gemstones and the other with manufactured imitations, s/he would have to look closely to tell the difference and even then might guess incorrectly. The first tray probably involved human suffering and degradation to acquire. The second was made in a laboratory and/or factory by better-paid (but probably still not enough) workers. Which tray do you prefer?

I’d say tray #2, but quite frankly, I’d much rather an option C: like a necklace of reclaimed wood or recycled glass or something. I would wear it with my clearance rack dresses and Chinese-grocery-store dance shoes while eating locally grown ‘real’ food enhanced with fresh herbs from my garden and admiring my collection of handmade art (most of which cost me less than lunch at Burger King). 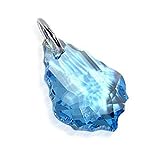 Let's get this straight: This blog post isn’t about me being holier-than-thou or frugal (although my cousin is the Queen of Free). It isn’t even about my financial situation or some sort of sacrificial abstinence from the finer things in life. I am not sacrificing anything; I have a beautiful home, eat delicious meals, attend elegant functions, travel the world and look fabulous while doing so thank you very much. I am not silently judging you, my dear friend, when I glance at the shiny rocks you are wearing as you tell me how you want to end suffering in the world; I recognize that my purchasing habits are also hypocritical and we're on this journey towards sanctification together.

What I’m really trying to say is this: It is high time we step back and reconsider how we define the glamorous life because the status quo is hurting the world and not making us any happier (yes, I did just rip that off from Annie Leonard). Let's recover from our affluenza by revisiting our views on quality and style. If we don’t, we are doomed to a world where even the most glamorous of our evening functions consist of women wearing the cost of college tuition, men wearing what they wore to the office and the d.j. blasting techno all night. Is that what we really want?  Is it?? Perhaps the only thing worse than saying “Let them eat cake! and Have our old clothes!” is not realizing that our cake is nasty and we're actually naked.

Of course, you should take everything I write in context. After all, I'm just that odd ballroom dancing United Methodist pastor who lives in somewhere in the heart of Africa.


Taylor
Posted by Taylor Walters Denyer at 5:49 AM